The headlines from the Fourth Quarter 2008 are still fresh in our minds: global financial crisis, market turmoil, brand-name Wall Street firms disappearing or restructuring, massive government bailouts. The result was a massive market decline unmatched in decades, with the S&P 500 Index posting a -21.94% loss for the quarter and – 37% for the year – and a -42.74% from October 9, 2007 through November 30, 2008.

The question on most investor’s minds is: what next? While no one can answer that question with complete certainty, we believe there are two important trends to consider as we look forward to 2009. The first is the pace of market recoveries after previous bear markets, and the second is rooted in the unusual nature of the September-October 2008 decline in which many asset classes that traditionally act independently declined more or less in unison. Let’s take a look at both.

After a Bear: Pace of Recovery

History is not a guarantee of future performance, but it may offer a potential framework for setting expectations. The table below shows each decline in the S&P 500 of greater than 20% since 1950, with the subsequent market performance 1 year and 2 years afterwards:

After each bear market, the market showed a robust rebound, often earning back the bear market’s losses by the end of the first twelve month period. One lesson to consider is that investors who suffered the decline, then retreated to the sidelines “waiting for the market to turn around” probably missed some of the gain.

Is the bear market over? Are we in a recovery period? That remains to be seen, but there are positive signs. A number of commentators are suggesting that mid- to late November 2008 represented a potential market bottom. Since November 20 through December 31, 2008, the S&P 500 returned a brisk 20.47%. There are clearly challenges ahead, but the near panic of the fall may potentially be subsiding.

A Return to Diversified Correlations?

The second possible trend requires some explanation. In portfolio management, the degree to which asset classes track each other’s returns is called correlation. Highly correlated classes rise and fall together, while highly uncorrelated classes tend to perform independently, with one class rising as the other falls.

One of the arts of portfolio management is piecing together asset classes that perform differently in a given environment, so that we can attempt to control risk and gain return opportunities. Unfortunately, one of the challenges at the end of the third quarter and into the fourth was that many equity asset classes became very closely correlated. In other words, the financial storm was strong enough to knock everything
down, leaving few places to provide shelter.

This high degree of correlation is very unusual. Over the next few months, however, we expect to see correlations spreading as some asset classes, industries, sectors or regions begin to recover more quickly than others, while others slump further.

What this means for you is that while the real economy is expected to face continued difficulties in the coming year, and the capital markets can be expected to rise, fall and drift as well, we can potentially expect to see increasing opportunities for risk management and increased returns. Spreading correlations create space for portfolio strategists and investment management firms to find potential value on your behalf.

Thank you for your trust

2008 was a tough year, and the last months, including the Fourth Quarter, offered an unprecedented combination of challenges and headlines. (We have included our review of index returns separately.) I want to thank you for the trust you have placed in us and reaffirm our commitment to working hard on your behalf in the coming year.

Certainly the past few months may have raised questions or concerns. Separately, your objectives or circumstances may have changed. Please do not hesitate to contact us; we will be happy to review your investment plan with you. We believe that by working together, we will be able to help you achieve your financial goals.

The U.S. Economy contracted 0.5% during the third quarter contrasting with a 2.8% growth experienced during the second quarter. The Federal Reserve (“the Fed”) decided to reduce the Fed Funds rate down to 0.25% in December. Measured by the Consumer Price Index, inflation for the month of November was 1.1% on a year-over-year basis . Unemployment, as measured by the jobless rate released by the Bureau of Labor Statistics in November was 6.7%. Oil futures closed at $44.60 per barrel in 2008, a decrease of -55.68% in price from its close from the third quarter of 2008 . The U.S. Dollar appreciated against the Euro by only 0.85% for the quarter; and depreciated -4.76% versus the Japanese Yen for the same period. 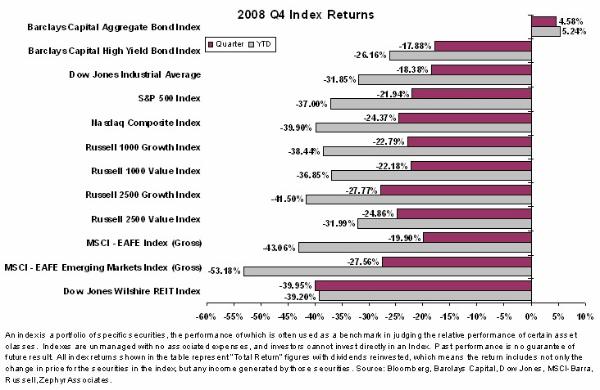 The opinions and forecasts expressed are those of Genworth Financial Wealth Management, and may not actually come to pass. This information is subject to change at any time, based on market and other conditions and should not be construed as a recommendation of any specific security or investment plan. The representative does not guarantee the accuracy and completeness, nor assume liability for loss that may result from the reliance by any person upon such information or opinions. Past performance does not guarantee future results. The S&P 500 Stock index is a widely recognized, unmanaged index of common stocks. Past performance is no guarantee of future results. Average annual returns assume the reinvestment of all distributions and/or dividends.

What is a Hedge Fund?

What is a Credit Line?