The main themes for the second quarter of 2007 were similar to those we had at the start of the year. The subprime loans problems, continuing slowdown in the housing industry, and high energy prices, have not yet negatively affected the rest of the economy. Although slowing, the economy remains solid due to full employment and rising wages.

During the month of May, markets saw a strong rally that culminated with a new all-time high on June 4th for both the Dow Jones Industrial Average and the S&P 500 Index, closing at 13,676.32 and 1,539.18 respectively. The rest of June on the other hand, was tainted by high volatility in the stock market, increasing rates in the fixed income space, a slew of mergers and leveraged buyouts, as well as several large new offerings. 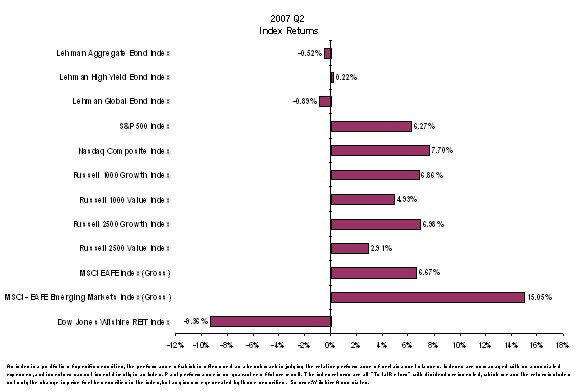 The U.S. Economy grew 0.7% during the first quarter of 2007, a sharp decline compared to 2.5% growth during the last quarter of 2006. This was mainly due to a slowdown in the housing market. The growth in the first quarter was also well below the forecasted growth rate of 2.4%. According to the last Bloomberg survey on June 8th, the forecasted GDP number for the second quarter sat at 2.6%.

The Federal Reserve (“the Fed”) decided to leave rates unchanged at 5.25% during the quarter, a continued policy that has kept rates stable for more than a year. Measured by the Consumer Price Index, inflation for the month of May was 2.7% on a year-over-year basis5. Unemployment rate, as measured by the jobless rate released by the Bureau of Labor Statistics in May, was 4.5% – in line with the three previous months.

As we move further towards the second half of 2007, we remain confident in your investment strategies and will continue to monitor them closely against your financial objectives. As always, please let me know about any upcoming changes to your financial goals and I welcome the opportunity to spend time with you to review any questions you may have.

1 Bloomberg These figures represent “Total Return” with dividends reinvested, which means the return includes not only the change in price for the securities in the index, but any income generated by those securities
2 Ibid
3 Ibid
4 Ibid
5 Bureau of Labor Statistics
6 Bloomberg
7 Ibid

Is Pet Health Insurance Worth It?