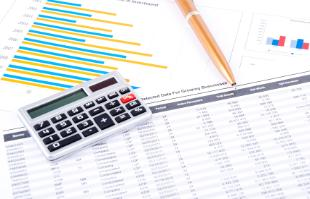 If you invest money in mutual funds, the expense ratio is an important number to understand. It’s basically a percentage that represents the cost of owning a mutual fund. A refresher or introduction to mutual funds: these are accounts that are invested in several different stocks and/or bonds. Several investors pool their money together and purchase a portfolio of investments. Owning a mutual fund is beneficial because investors are able to have ownership of several different stocks without the cost of actually having to purchase the individual stocks. A fund manager manages the mutual fund, either on an active or passive basis.

Components of the Expense Ratio

Here are a few of the components of the expense ratio:

Generally, a smaller ratio is better because it means you’re getting more money from your mutual fund. You don’t pay the fee directly. Instead, the fee is built into the fund’s return, which makes it tricky to know exactly how much you’ve paid. Index funds have the lowest expense ratios because these aren’t actively managed. Expect to see fees around .10% to .25% on index funds. On the other hand, actively managed funds may have fees as high as 2% or even as low as .10%. Funds with small assets, typically charge higher expense
ratios because they don’t have as many assets to operate from. On the other hand, funds with more assets can spread their expenses and charge a lower expense ratio.

When you’re evaluating a new mutual fund, you can find the total expense ratio in its prospectus. Or, you can use an online tool like Morningstar to evaluate the features of the mutual fund. Each year, mutual fund companies put out an annual report that shows the expense ratio charged in the previous year.

The expense ratio isn’t the only type of fee you should watch out for with a mutual fund. Some have a load or commission, typically a front-end load that you have to pay when you first purchase shares of the fund.

A fund with a 5% front-end loan would require you to pay $500 upfront when investing $10,000, for example. Most often the load is a commission that goes to the salesperson who offers the fund. If you’re an experienced investor or are comfortable managing your own money you may want to consider a no load mutual fund. These funds won’t come with an upfront sales charge and often come with low expense
ratios.

Index Funds: An Indicator of Stability?