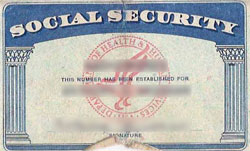 Many Americans collect Social Security benefits early and face a penalty, but by waiting until their official retirement age, they would receive full benefits.John Post works hard. Born during World War II, just before the Baby Boom began, he’s 62 years old and has spent his entire career in education. As a high school administrator, most of his work days start at 7 a.m., and many don’t end until 10 or 11 p.m. after a school-related event. He works six days a week and rarely takes a vacation. While he’s in decent health, it’s been a year since triple-bypass surgery and he does his best to eat right and exercise.

But one of these days he’s going to have to retire. A man responsible for educating students for several decades will soon have to call it quits as a high school superintendent. Post hopes to return to the classroom and teach part-time after retirement. Besides teaching, he’s got a whole list of things he would like to do in retirement, and continuing to work and receive extra income is extremely important to him.

Mr. Post didn’t consult with a financial planner when thinking about retirement. Thus, he’s always had some sort of a plan, but only a loosely defined one. Now he wants to make sure he doesn’t outlive his retirement income and that means working a bit longer and in the process, avoiding collecting Social Security early. It’s one more reason to seek professional advice when planning for retirement.

The Baby Boomer generation is famous for a lot of things. One could easily argue that people born during the era are some of the most unique individuals that have ever lived. Now, with improved health conditions, an increased standard of living, and major medical advances, people are living longer than ever before. They’re also working longer than ever before. Some are working longer to keep active, others because of the benefits. But many people, Mr. Post included, are working longer to make sure something is left after he’s gone. He’s working as long as he can to avoid using up personal retirement savings and to maximize his Social Security benefits.

By drawing Social Security benefits early, (the earliest you’re eligible is age 62), you automatically reduce the amount in benefits you’ll receive for the rest of your life. A majority of Americans take their Social Security benefits early, which means they’re left with less money. Some people are forced to take early retirement due to a lack of planning or situations beyond their control.

The chart below gives some examples provided by the Social Security Calculator at www.ssa.gov. This chart assumes that you were born in 1950 and are currently earning $85,000 a year in income. You can see below how much can be gained by simply waiting a few years.

So why would anyone draw early? Quite honestly, many people are forced to draw early because of a lack of proper retirement planning. Some reach 62 and are just ready to be done working but don’t have any other (or very little) retirement income in place. Without a proper plan,they’re forced to collect Social Security to help pay the bills. It’s one more reason why professional advice can go a long way to helping you be independent in your retirement years.

Currently, the official retirement age varies according to the year you were born. In Post’s case, his official age to retire and receive full benefits is 65 years and 10 months. He plans on waiting until that day so that he can collect full benefits. He also wants to work that long so he can continue to receive healthcare through his employer and continue to earn income. If you do start drawing benefits early and you still work, there are certain limits to how much money you can make each year while drawing Social Security benefits. If you go over those limits, your benefit is reduced even more. That’s just one more reason to wait as long as possible to take Social Security.

Post emphasizes that the longer he can earn a steady income, the longer he can wait to collect Social Security benefits. Not to mention that once he starts drawing Social Security, his benefits will be increased by the added income. Post also emphasized the fun-factor in continuing to work. He’s excited because by working longer, his retirement savings can stay intact longer and he’ll have more assets left for things like vacation and hobbies. He’s also concerned about leaving something to pass on to the next generation.

When deciding what age you should retire at, you should always consult with a financial professional. There are more than just the factors above to think about when making such an important decision. However, if you want to receive full Social Security benefits, it’s important that you wait until your official retirement age. That can be a difficult decision for some people to make. Post says the decision to wait was an easy one for him.

Post spoke about why he’s working longer and the benefits of waiting to draw Social Security. He added that when you’re finally able to travel and you see all the sights of this country, you realize why you’re retired. It’s to enjoy the great things this world has to offer. And the longer he can afford to do that, the happier he’ll be!

Are REITS Right for Your Portfolio?