There is an old expression, “May you be cursed to live in interesting times.” With massive Federal bailouts and the collapse of some of the most prominent names in the financial industry, these are certainly interesting times. In consideration, we have departed from our traditional economic statistics review in favor of a discussion about what has happened in the markets and what to potentially expect going forward.

There is no denying that, while the recent financial turmoil has been centered around two widely recognized trouble spots – the Financial and Consumer Discretionary sectors – the suddenness and severity of the volatility caught investors off guard. Let’s work to understand four things: how we got here, whether we’ve been here before, what “the crowd” is likely to do, and what you might consider looking forward.

Understanding the market environment
To oversimplify, over the past several years we have seen an enormous expansion of credit fueled by, and in part fueling, the housing boom. A complex market developed in which mortgages, particularly riskier subprime mortgages, were traded among financial institutions, spreading the risks. As loans began to fail, these institutions were forced to increase capital reserves. Money for new loans began to dry up, creating the credit crunch, squeezing consumer spending.

Entering the third quarter, none of this was a surprise. The market began sliding in October 2007 as investors tried to “price in” the bad news. What changed, particularly in September, was the recognition of just how far, wide and deep the problems really were. In particular, the Federal bailout of AIG, the failure of Lehman Brothers and the sale of Merrill Lynch redefined the magnitude of these issues as measured by investors who previously felt comfortable with their estimate of the situation.

Have we been here before?
The word “unprecedented” has been used to describe the crisis in the financial industry, with the predictable effect of inspiring increased anxiety. But while the particular combination of events is historically unique, we have been here before.

Younger investors will relate to the dot.com melt down and the market crash following 9/11. But they may never have heard the name Drexel Burnham – and with good reason. Once a huge brand name on Wall Street, Drexel disappeared in 1986 under the pressure of the junk bond market crash.

A couple years earlier, one of the nation’s largest banks, Continental Illinois, was taken over by Federal regulators, just as Washington Mutual was in the last few weeks. And of course, there were the savings and loan collapses in the late 1980s. The point is simply this: massive and sudden shocks are not unprecedented. The capital markets absorbed, adjusted and survived.

How will most investors respond?
A quick look back at recent history shows that investors frequently flee weak sectors or convert to cash after prices have declined. It’s a familiar cycle of emotions and the likely reason why, according a widely quoted study by Dalbar Inc. (Quantitative Analysis of Investor Behavior – 2008), individual equity investors tend to significantly underperform market indexes.

Consider the following table, which lists a few select market shocks from recent decades along with how long it took the market (as represented by the Standard & Poor’s 500 Index) to begin climbing once again.

The table is by no means definitive. It is meant to suggest that historically speaking, many catastrophic events were absorbed by the capital markets in a comparatively short time. The lesson is simply that maintaining the course after a shock is generally the prudent path.

What should you consider looking forward? While we are confident that the markets will eventually emerge from the current turmoil and begin climbing once again, we acknowledge howdifficult it has been. Market losses have been substantial and the impulse to abandon your course can be strong.

However, your investment plan was built with the understanding that corrections, even bear markets, are inevitable. It was designed to diversify risk across asset classes and across investment management firms as we seek to keep you aligned with the forces driving the market. Staying the course means that when the market does recover, you will be positioned to participate.

If your goals, circumstances or risk tolerance have changed, we have the flexibility to make adjustments. Our goal is your comfort and confidence in the plans we shape together. Without question, these are challenging times. If you have questions we are here to talk and review your portfolio and financial objectives.

The U.S. Economy grew 2.8% during the second quarter contrasting with a low 0.9% growth experienced during the first quarter. The Federal Reserve (“the Fed”) decided to keep the Fed Funds rate at 2.0%. Measured by the Consumer Price Index, inflation for the month of August was 5.4% on a year-over-year basis . Unemployment, as measured by the jobless rate released by the Bureau of Labor Statistics in August was 6.1%. Oil futures closed at $100.64 per barrel at the end of September, a decrease of 39.11% in price from its close from the second quarter of 2008 . The U.S. Dollar appreciated against the Euro 10.55% for the quarter; and remained basically flat versus the Japanese Yen for the same period . 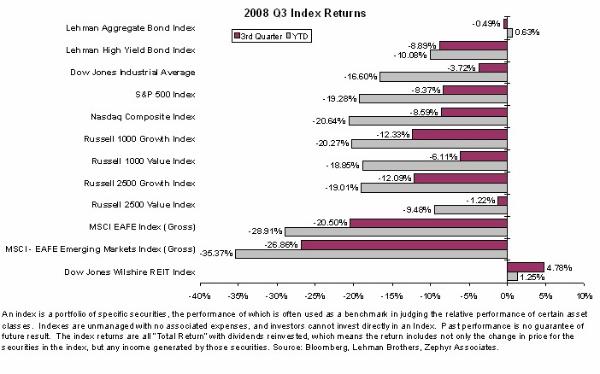 i Bloomberg. These figures represent “Total Return” with dividends reinvested, which means the return includes not only the change in price for the securities in the index, but any income generated by those securities
ii Ibid
iiiIbid
ivBureau of Labor Statistics
vBloomberg
vi Ibid

The opinions and forecasts expressed are those of Genworth Financial Wealth Management, and may not actually come to pass. This information is subject to change at any time, based on market and other conditions and should not be construed as a recommendation of any specific security or investment plan. The representative does not guarantee the accuracy and completeness, nor assume liability for loss that may result from the reliance by any person upon such information or opinions. Past performance does not guarantee future results.

The Difference Between Soft Pull vs Hard Pull Credit Checks