The third quarter of 2007 was certainly a wild ride. In July, most major equity indexes reached or approached all time highs, only to decline sharply in August as subprime mortgage lending concerns and the ensuing liquidity crisis worried investors. Then in September, the Federal Reserve (Fed) cut the Fed Funds rate by a surprising 50 basis points. Equity indexes surged in response and for the most part ended the quarter in positive territory.

While the market may have reverted to normal levels of volatility and adjusted to the higher cost of borrowing, the third quarter has had a lingering effect. Most notably, there was a “flight to quality” as investors reassessed how much risk they were comfortable carrying. Many turned toward high quality growth companies with low debt levels and treasury securities as likely to weather the storm.

The graph below shows third quarter and year-to-date returns for the major indexes. Here are a few of the trends and returns that we think are particularly noteworthy:

The Emerging Markets were the outright winner in terms of performance for the quarter as Brazil, Peru, China, India and Turkey all provided returns in excess of 20% for the quarter.

With real estate performance being driven by fundamentals again instead of privatization deals, the Dow Jones Wilshire REIT Index bounced back after the correction in June and July. 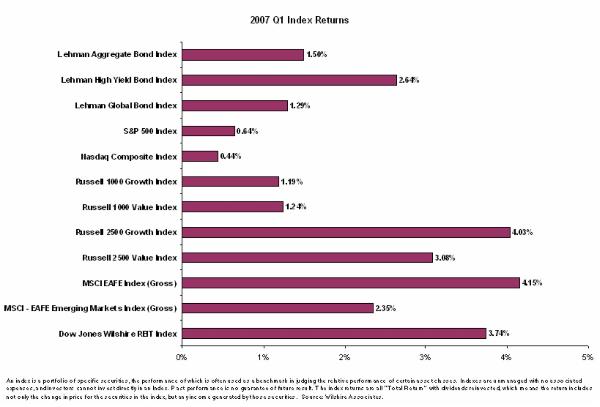 The U.S. Economy remained relatively strong despite the slowdown in the housing industry and record-high energy prices. Continued
consumer spending, along with the combination of solid demand for US goods abroad and a weak dollar have helped keep the economy
buoyant.

The second quarter’s GDP was 3.8% – significantly above the 2.6% forecast. Expectations for the third quarter, according to a current
Bloomberg survey, are for GDP to check in at 2.4%. Growing concerns about higher interest rates clouded money borrowing activities
and slowed Merger and Acquisition (M&A) activity slowed. The recent Fed actions provided new enthusiasm for M&A players, especially
for companies with generally strong fundamentals.

The recent volatility in the market has clearly emphasized the need for diversification and a focus on the longer-term objectives rather than reacting to short-term events. As we have seen, despite the drama the third quarter showed positive returns.

However if you would like to reassess the level of risk in your portfolio, we welcome the opportunity to spend time with you reviewing your financial objectives and any questions you may have.

How to Become a Pharmacy Technician

The Difference Between Secured and Unsecured Debts