With the arrival of June 30th 2005, we find ourselves halfway through the year, giving us reason to pause and reflect. The capital markets have been receiving mixed signals for the first six months of 2005, and they are experiencing difficulties in interpreting conflicting data in several areas.

Since January 1st, the Federal Reserve has raised short-term interest rates four times, yet at the same time long-term rates have actually decreased. This has resulted in a “flattening” of the bond yield curve, which had 3-Month Treasury Bills yielding only .76% less than a 10-Year Treasury Note at the end of the quarter.1 This interest rate environment continues to confound the best and brightest in the business, most notably Federal Reserve Chairman Alan Greenspan. In addition, these low long-term rates have helped keep the housing market very strong, creating in certain areas what many are referring to as a potential “bubble.”

Energy has also been a key area of concern. Oil prices began rising in 2002, but they had been so low for so long that consumers did not initially react to the increases. But now, with oil pushing the $60/barrel range (up from $20/barrel just 3 years ago)2 the cost of energy has begun to show effects in the economy, as the additional cost to consumers, combined with flat personal income growth, has dampened consumer spending.

Notwithstanding the uncertain interest rate environment and increasing energy costs, however, nearly all of the major financial markets were up for the 2nd quarter of 2005, as illustrated below. 3 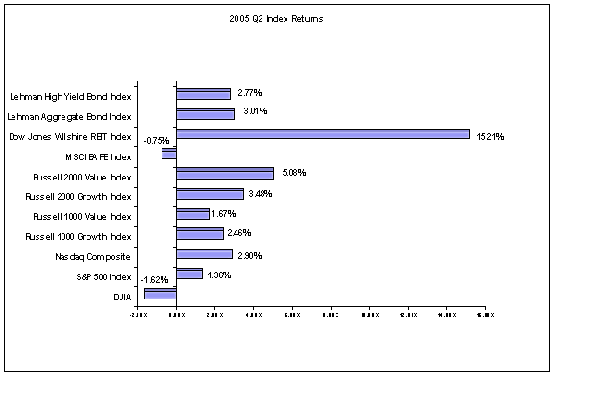 The REIT market, represented by the Dow Jones Wilshire REIT index, roared back in the 2nd Quarter with a total return of 15.21%, after giving up 7.30% in the 1st Quarter4. Next behind REITs was Small Cap Value, represented by the Russell 2000 Value index, with returns of only a third of that of the REIT Market, at 5.07%5. The most interesting return was that of the Dow Jones Industrial Average, which was down 1.62%6 for the quarter, while the broader U.S. equity markets were up by about the same magnitude. This was due to big downward slides in key Dow Components including Disney, IBM, and 3M7, which were the result of company-specific events that hurt those stocks individually and not the broader markets.

The environment for the capital markets for the balance of 2005 will likely continue to reflect the uncertainty we’ve experienced to date this year. Energy will continue to be on the minds of all capital markets participants, along with Federal Reserve policy and geopolitical events. In this environment, we believe our clients remain well-positioned in portfolios built with detailed attention to asset allocation and risk, and managed by experienced, capable institutional Portfolio Strategists and Investment Managers.

How to Write a Killer Cover Letter