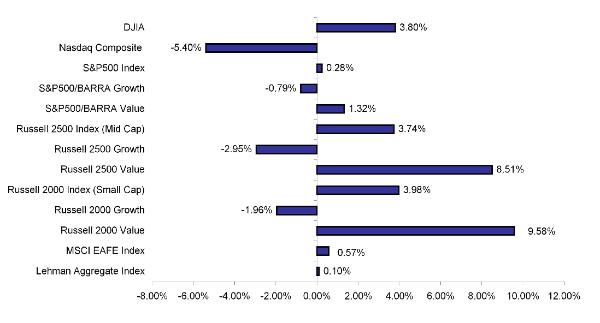 The year began with Enron’s collapse and the ensuing accounting scandal that spread throughout equity and fixed income markets as investors questioned the quality and transparency of corporate earnings. Investors continue to be skeptical of promised future profits, with markets remaining tepid in recent weeks despite mounting evidence of economic recovery. Strong rises in consumer confidence, home sales, and manufacturing suggest that economic conditions are improving, perhaps more quickly and robustly than initially expected. 3

Despite numerous indicators of economic strength, some risk of additional retrenchment remains. Corporate profits and capital expenditures will need to visibly firm for the economy to fully regain its footing in expansion. Further, as the rate of growth increases so too does the risk of inflation – Greenspan’s cautious but optimistic remarks tempered market performance in March as investors worried that interest rates might begin rising sooner rather than later.

Although uncertainty and risk remain an inherent part of investing, market sentiment has calmed considerably from the tumultuous days of 2001. Patient, steadfast investors have been rewarded, with the Dow Jones Industrial up 26% from its September 21st low, and the Nasdaq up nearly 30% over the same period.5 As always, we recommend adhering to long-term investment objectives and a disciplined investment strategy, and welcome the opportunity to review with you your portfolio and financial goals.